Jeremy Corbyn was a weak leader

"May needs a vote of confidence"

German wave: Great Britain's Prime Minister Theresa May has announced new elections for June 8th. Will you follow the example of Boris Johnson, who wanted to withdraw after the Brexit campaign?

Thomas Matussek: No, I do not think so. It seems to me that your calculation is that you now want to obtain additional legitimation for the Brexit negotiations, because after the narrow vote, many people took to the streets and said: 'If I had suspected that, then I would be also voted '. The Remainers said they didn't have half of the country behind them, but half of the people who went to the elections. If she is taking a sensible victory now, she can rightly say that she really speaks for the entire country.

It could also happen that the election turns into a vote to exit Brexit ...

Course correction is difficult. As long as the two-year period is running, you can't just say, sorry, I didn't mean it that way. Of course, I can't guess Ms. May's thoughts, but it would really be a door slamming the likes of which the country has not seen in many years if the early elections were an excuse to throw out Brexit. I can not imagine that.

Would it be formally possible after the new elections to reverse Great Britain's exit from the EU?

The Brexit clock is running. If the British no longer want, they have to apply for it and at the same time apply for entry again. This is legally possible, but requires the unanimity of all 28 countries. You can't say that we changed our minds after the election result, we pretend that nothing happened, that won't work.

The time until the new elections on June 8th is also running. Which question will the election campaign come to a head?

I think Theresa May will argue that in these difficult negotiations she has to be sure that she represents the whole country and therefore needs a vote of confidence. Of course, she hopes that this vote of confidence will be stronger than the legitimation for Brexit. She wasn't elected, she just slipped into the role of David Cameron. 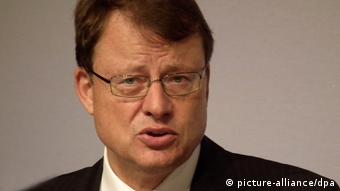 If she does not receive this vote of confidence, she would have to resign ...

One of May's strategies could be: We'll pour you pure wine now, we mention the opportunities of Brexit, but we don't hide the outrageous risks and disadvantages either. In the last campaign, the Brexit supporters lied a lot, they worked a lot with demagogy and populism. May may say this is a crucial hour when the country has to stand together, like in 1940. Whenever Britain is under pressure, British virtues come forward, the country scrambles around and feeds on the Prime Minister Vote of confidence. The very last option would be to use the new elections as an excuse to shirk responsibility. I consider that to be the most unlikely scenario.

What about the British opposition? Will it take a clearer position now than it did in the referendum?

I have this hope. The Labor Party, however, is in a terrible state. There is nothing left of the glory days of Tony Blair or Gordon Brown. Labor leader Jeremy Corbyn is a weak leader. He more or less stayed out of history even during the referendum campaign. As a European, one can only hope that the pro-European forces that exist in the Labor Party will now step forward again.

Has the Brexit debate changed since the UK referendum on June 23, 2016?

I was in London on June 23rd. It rained insanely, the subways were down. This time the water-shy could also vote, as well as the people who always know everything better afterwards. It would also be interesting to see how the Scots position themselves and whether the independence movements there will get a stronger boost. And how the Northern Irish behave. Then there are all the fishing and coastal towns that have benefited insanely from the European funds, but which voted for Brexit. Maybe they are slowly waking up and asking themselves: What actually happens when we no longer belong?

Thomas Matussek was German Ambassador to Great Britain from 2002 to 2006 and is a member of the German-British Society.

The interview was conducted by Astrid Prange.