The pictures were taken by the author in India and Nepal from 1974 to the present day. They are part of the “Jontes Flood of Images” archive and are under copyright.

The Indians are an animal-loving people and include these living beings in their religious myths, in festivals and in their everyday lives. Who does not know the holy cow of the Hindus. Each deity here in Hindu South Asia has its own mount and many of them also have a partially animal shape. One of the gods already occurring in the Vedas, who embody the elements, is also the fire god Agni, whose riding and companion animal (Skr. Vahana) is a dog. This is how he is depicted in the Nepalese temple district of Gokarna.

And one of the terrifying manifestations of the high god Shiva is Bhairava, accompanied by dogs, as can be seen at the Bhairava temple of Bhaktapur in the valley of Kathmandu. With bitten off limbs of defeated demons in their muzzle, they romp about their master. 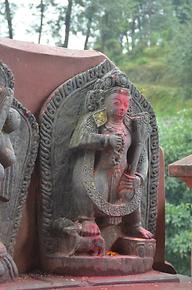 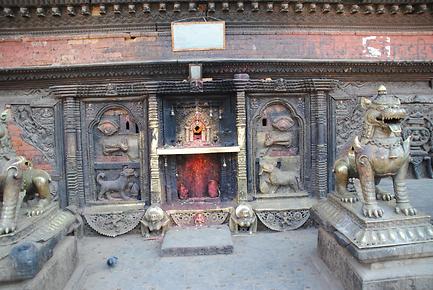 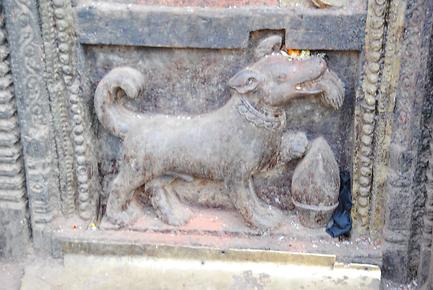 What is part of everyday street life in India are the dogs among the animal contemporaries that are always visible and audible.

An estimated 50 million dogs in India stray close to people in the settlements and fight their way through life with their own strategies. In addition, there are around 10 million people who, as family members, often pampered and cared for in urban and village households. 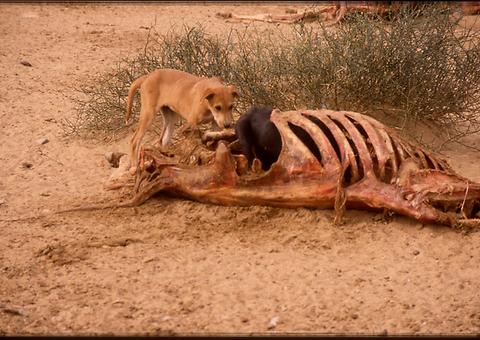 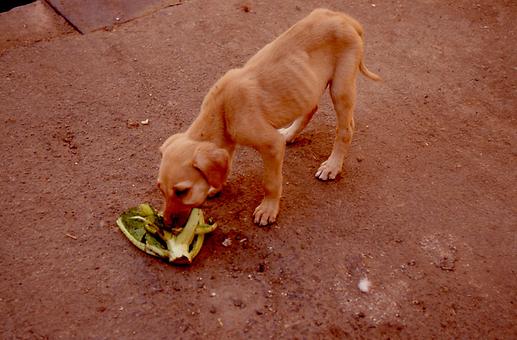 In and of themselves, dogs are predators who are after animal protein. Like the vultures, they also act as health police by eliminating animals or carrion that have been destroyed. After almost all of the vultures, which were previously always present, have fallen victim to a mysterious viral disease in the last few decades, the importance of dogs outside of the settlements is increasing. In life with and around people, however, their food acquisition has already changed so much that they do not disdain plant foods.

The dog already became a companion to humans when they were still hunters and gatherers in small groups, following their animal and vegetable food and taking in wolf pups left alone without their mother, attracting them and thereby gaining a valuable hunting helper over time. In addition to the wolf, the animal horizon also includes the African and Asian wild dogs. They are pack-building hunters who track down their prey in a close community, circle them in a rush and finally kill them. These semi-wild Indian street dogs draw part of their livelihood from the religiously stored general love of animals of the Indians, which also means that these dogs are fed a lot and thus give the food donors a good karma in the Hindu life concept.

In the highest social circles, European pedigree dogs are exaggeratedly fondled as lap and fun dogs and looked after by their own staff, as at the court of the Maharajas of Jodhpur. In urban environments, dogs are used to housekeeping as puppies for various purposes. A Nepalese trader in Bhaktapur may one day be able to use him as a watch dog.

One can see more in Tibet. In the Buddhist lama monasteries there are numerous dogs that seem to be well fed and satisfied. Since in the karmic rebirth cycle, which is based on the life balance, it can easily be that one comes into the world again in animal form when sins have predominated, so it is said that the monks take special care of these monastery dogs, because perhaps it is that might happen to them too. 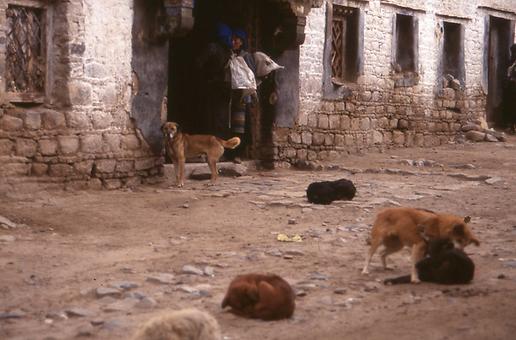 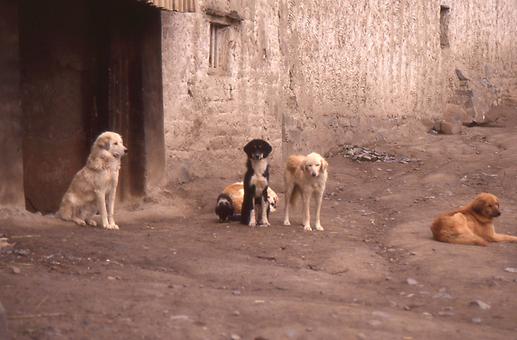 What we observe as dogs on India's streets today are medium-sized, color-coded, light-footed animals that appear harmless and good-natured on the one hand, but can also be carriers of annoying to dangerous parasites and, above all, rabies, which are not even in Europe is completely eradicated. Rabies or dog fury require a tetanus vaccination, which should always be refreshed, especially if you are traveling to India.

The basic rule when dealing with India's dogs is therefore: stay away from them, avoid them when they approach you, never touch them!

Only with the Muslims do dogs have a bad status. They are despised as unclean and one keeps away from them, chased them away wherever they appear. Arabic swear words often contain the linguistic element kelb "dog".

The stray dogs have a love life that is not hindered by humans, so to speak, and they breed freely at every opportunity. It is not uncommon to see mother dogs suckling their puppies. Often they are spindly themselves and let one or more sprouts suckle on their milk sources. Often they are pitiful characters who are barely able to regain their strength and yet instinctively take care of their puppies.

It is noticeable that there are puppies in the litter who are not alike. Were there several “fathers” at work?

One has the impression that India's stray dogs are primarily nocturnal. Wherever they settle down, they sleep until their nocturnal "day's work" begins and they sometimes break out into such collective howling and barking that it is almost unbearable. It is of course a means of communication within a pack or one has the feeling that territorial battles have broken out ..

Perhaps the adage not to wake sleeping dogs originated here in India.

You don't let yourself be disturbed either and everything has to evade him.