Proud and cheered by the masses who blindly obey them - as in the photo above - this is how Hitler and Mussolini liked to see each other. The fascist Mussolini and the National Socialist Hitler would have liked to have divided the world among themselves. In the beginning, Hitler sailed in Mussolini's slipstream, admired him and tried to imitate him. In the end it was Mussolini who looked up to Hitler and tried to profit from his successes. Both were linked by a partnership that was conflict-laden and dramatic on a personal level, and it ended that way. Endless suffering for the German, the Italian and many other peoples around the world were the consequences of this unholy political alliance.

The parallels in the history of Germany and Italy:

Despite all the differences, German and Italian history also have many parallels:

Mussolini and Hitler - partners and competitors:

As Mussolini 1922 with hisMarch on Rome took power in Italy, Hitler's movement in Germany was still in its infancy. Hitler admired Mussolini, a year later he wanted to emulate Mussolini with a putsch in Munich and a subsequent "March on Berlin". The coup failed and this contributed to Mussolini's initially looking at Hitler in a somewhat arrogantly condescending manner. In the 1920s, Mussolini was still relatively skeptical of Hitler and initially he did not share his racial theory either. In those years, especially from 1925, the fascists established a totalitarian dictatorship in Italy headed by Mussolini, newspapers critical of the regime were banned and the opponents of the fascists were persecuted with repression by the police. 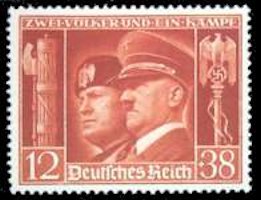 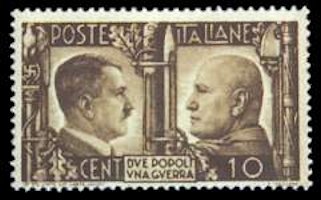 Two postage stamps from the 1940s. Both have the inscription: "Two peoples and one struggle"
(Italian: "Due popoli, una guerra")
As Hitler then 1933 When he came to power, Mussolini had to quickly realize that he had been thoroughly mistaken about Hitler: the speed and brutality with which Hitler established his dictatorship in Germany instilled him respect. As far as anti-Semitism was concerned, from 1938 onwards Mussolini increasingly followed the course that Hitler was following in Germany.

Now the Italian fascists were proclaiming the existence of a pure Italian race, from which the Jews were excluded as "non-racial". The marriage of "Aryan" Italians with members of "other races" was forbidden. The Jews were excluded from the military, the education system, the administration, from large parts of the economic life and from the fascist party. Although racial extermination, in contrast to National Socialism in Germany, was not one of the explicit goals of Italian anti-Semitism, in the remaining fascist republic from November 1943 the Jews were arrested and interned in Italian concentration camps, which usually ended in the Holocaust.

From the beginning Hitler worked purposefully towards a war. As a result, Mussolini felt more and more forced to act, he had to prove that he was not a "coward". This is how the "Rome-Berlin Axis" came into being and Mussolini kept repeating that Fascist Italy, if it has a friend, marches with him to the last resort.

Despite all the grandiose words, Mussolini at first shrank from this final consequence, but not out of love for peace: the problem was that Italy was in no way prepared for war, either materially or psychologically. By insane rearmament and constant hammering in fascist propaganda, Mussolini believed in the year 1940To be able to imitate Hitler, a year after Hitler started the Second World War, and began a kind of "parallel war" in other theaters of war. But the Second World War would finally show who would play first fiddle in the worldRome-Berlin axis played. Without the massive intervention of German armed forces, these parallel wars - especially in the Balkans - would have failed miserably, which made Mussolini increasingly dependent on Hitler.

Hitler orders the occupation of Italy:

When disappointment, despair and exhaustion in Italy finally led to the overthrow of Mussolini and the armistice with the Allies in 1943, Hitler reacted in his typical manner: Whoever is not my friend is my enemy! Although he still had a certain friendly relationship with the person of Mussolini until the end, all his anger over the "Italian betrayal" was discharged: if not love, then hate. Hundreds of thousands of Italian soldiers were captured and sent to Germany in concentration camps or for forced labor. Also theRepubblica Sociale Italiana, the rest of northern Italy, which under Mussolini's command remained loyal to Hitler until the end, he treated with the arrogance of the occupier.

The tragic end - Hitler orders the destruction of Germany:

Fight to the end, that was Hitler's watchword. In the last weeks of the war, when the Allies were already on German soil, Hitler ordered the "scorched earth" tactic and declared in a circle of his closest confidants:

"If the war is lost, the people will be lost too. It is not necessary to take into account the fundamentals which the German people need for their most primitive survival. On the contrary, it is better to destroy these things yourself. Because the German people have proven to be the weaker (...). What is left after this fight is anyway only the inferior, because the good have fallen".

For the eighth time in a row: