What is a Beta Carotene Function

Beta-carotene is a phytochemical that the human body converts into vitamin A. It plays an important role in maintaining the immune system. Thereby it protects against infectious diseases and promotes the fight against cancerous ulcers. As a preliminary stage of vitamin A, beta-carotene basically ensures that all body functions taken over by vitamin A can be carried out. Since vitamin A is part of the visual pigment in the eye, beta-carotene is used in particular to maintain vision.

Presence of beta-carotene in food

The approximately 50 carotenoids (such as alpha, beta, gamma carotene, capsanthin, lycopene, zeaxanthin or lutein) are exclusively synthesized by plants and are mainly found in plant-based foods. In foods of animal origin, they are only contained as an additive. Of all the carotenoids, beta-carotene is the most common in plant foods. This is one of the reasons why the human body makes the largest amount of vitamin A from beta-carotene.

All green, leafy vegetables contain carotenoids. Yellow-orange vegetables are mainly rich in alpha and beta-carotene. Carrots are particularly high in beta-carotene. A medium-sized carrot contains around 15 mg of beta-carotene, which is the daily requirement for vitamin A. 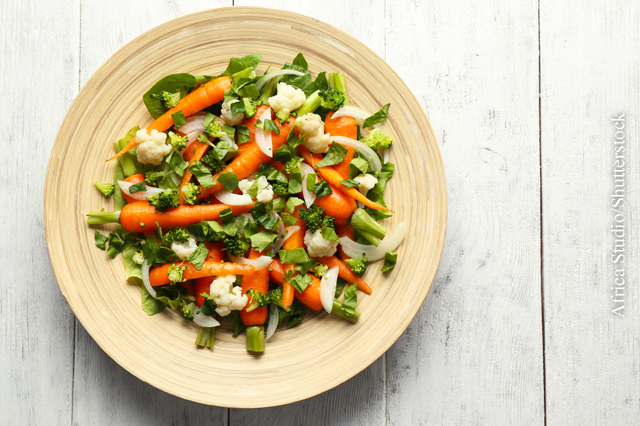 Vegetables are full of carotenoids and can be enjoyed without restriction. This is different with dietary supplements with beta-carotene. Special intake restrictions for smokers apply here: in studies, doses of 20 mg per day or more were associated with an increased risk of lung cancer in smokers.
www.shutterstock.com, Shutterstock Inc., New York, USA

The German Nutrition Society (DGE) recommends as a guide value for the daily vitamin A intake in micrograms / day:

Signs of a Carotenoid deficiency

With a chronic lack of carotenoids, the eyesight deteriorates, which is initially expressed at night. With a high deficit there is a risk of night blindness. A deficiency in carotenoids with a simultaneous deficiency in vitamin A leads to all deficiency symptoms that occur with a deficit of vitamin A: There is a risk of increased susceptibility to infection and an increased risk of arteriosclerotic heart disease. Affected people also have an increased risk of various types of cancer such as larynx, lung or prostate cancer. The carotenoid deficiency also affects hair, nails, bones and nerves. Growth disorders can occur in children and fertility disorders in women.

Causes of a carotenoid deficiency:

Carotenoid-containing food supplements are suitable for all people whose immune system is weakened, who have visual problems or inflammation. Cancer patients should only use vitamin A as a dietary supplement in consultation with their doctor. Have cancer. In addition, smokers, seniors, recently operated on or people with an increased level of stress benefit from an increased vitamin A intake. Your doctor or pharmacist will advise you on the dosage and duration of use.

Basically, the likelihood of an overdose of carotenoids is difficult because the body needs several carotenoid building blocks to convert it into vitamin A. 6 mg beta-carotene are necessary for 1 mg vitamin A. A higher intake of beta-carotene enables adequate production of vitamin A. In general, only as much beta-carotene is converted as vitamin A is required. The body stores or excretes the rest.