Nice people can be toxic 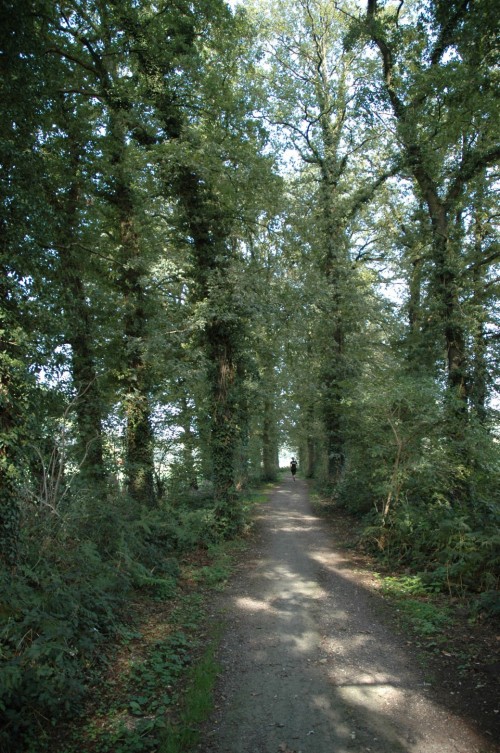 Smaller deciduous forest stands today on the Lower Rhine are a frequent element of the rural cultural landscape. They are often relics of what were once larger contiguous forests. They usually stop at so-called unfavorable locations, which are unsuitable for arable or grassland use due to their soil properties (moisture or lack of nutrients). Oak forests like this were mainly used for their own needs for firewood or for the production of furniture, equipment and pasture stakes.

Since the oak grove is very light due to this rural use, the light-loving bracken can spread well here. The leaves of the bracken, up to 2 m high, are light green in color, filigree and double pinnate. Its leaf surface is inclined in an arc shape with rolled leaf margins. 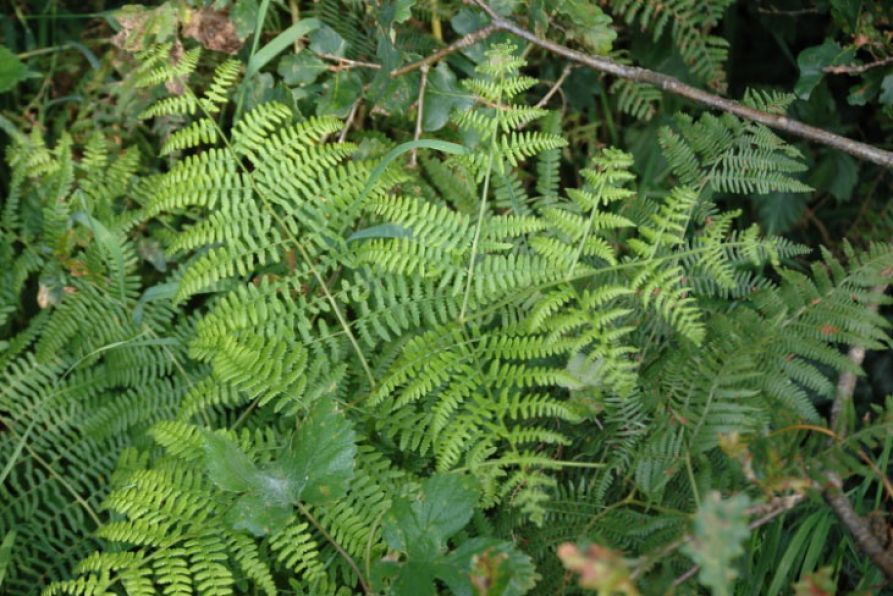 The entire plant is poisonous to humans. The highest concentration of toxins is found in the young leaves of the plant. Even when dried, the plant retains its poisonous effect.
The poison is also effective in horses, cattle and cows, sheep, pigs, hares and rabbits and other rodents such as guinea pigs and hamsters as well as birds. Eating an amount of 2 kg or more over a period of 30 days can be fatal for horses.
The naming of the bracken is said to be derived from the appearance of the leaves, which are supposed to be reminiscent of the claws of an eagle. Another explanation relates to the petiole, the cross-section of which is said to resemble the outline of a double-headed eagle with outspread wings.

Botanically, the oaks (Quercus) belong to the beech family (Fagaceae). Around 600 species of these mainly deciduous deciduous trees are known worldwide. The greatest biodiversity is found in North America.
In Germany, the proportion of the total tree population in forests is around one seventh. With the beeches they represent the most common deciduous tree species.
The bark of the oak is heavily furrowed. Its branches are gnarled. It bears nutty fruits, the acorns. Depending on the type of oak, the shape of the leaves is very different. The oak does not lose its alternate leaves until late, sometimes not until spring. The tap roots of the oak can reach very deep down to the groundwater.
The so-called St. John's shoot is a special phenomenon. Around St. John's Day on June 21, the oaks sometimes sprout their leaves a second time if they have previously been severely damaged by the weather or by feeding damage (e.g. by the caterpillars of the oak moth) were.
This second shoot can also be found in birch, hornbeam, red beech and various types of maple.
The oak can reach a very old age with up to 1000 years. Its height is between 25 and 40 m. It grows relatively slowly and flowers for the first time after about 60 years.
The species also native to the Lower Rhine are the English oak and the grape oak. You can tell them apart by their acorns. The fruits of the pedunculate oak sit in groups of three to five on 1.5 to 4 cm long stems, the fruits of the sessile oak on very short stems.
The valuable hardwood of oak has many uses, for example as a table top, floor covering or veneer. Historically, wood was primarily used in (half-timbered) house construction due to its high resistance to rotting. It is a very good construction timber for components exposed to moisture. It is used for stairs, parquet floors, exterior doors, thresholds, timber framework and in hydraulic engineering. Oak wood, with its high calorific value and long burning time, is also well suited as firewood. It can be split easily and stored for a very long time. Oak wood is also suitable for the production of wine and other barrels. Fruits (acorns), which are rich in carbohydrates and proteins, used to be used for fattening acorns. The young, smooth bark contains tannins that, among other things, used for the tannery (oak peeling forest).
The pedunculate oak is used in medicine because of the bitter and tannins contained in its acorns and bark as a medicinal and medicinal plant (e.g. for baths, external compresses or against various inflammations). The bitter substances of oak are also used for frost damage to hands and feet and as a poultice for inflamed eyes. The oak bark is also used as a tea herb for the preparation of bark tea, which is used, for example, for skin diseases or for stomach and digestive problems. Bach Flower Tea Oak is made from the blossoms of the oak.
So-called gall apples can sometimes be found on the underside of the oak leaves in autumn. These leaf growths arise as a defense reaction of the plant to deposited fertilized eggs of the common oak gall wasp (Cynips quercusfolii). The so-called iron gall ink is obtained from the dried and ground gall apples with the addition of iron and copper salts. It is document-proof and is still used today when signing international treaties.
The unusually large variety of insects that live on oaks is particularly striking. Up to 1000 species can be detected in just one treetop. The pronounced degree of specialization of numerous insects living in oak crowns can therefore also be seen as the evolutionary age of the oak. Oak trees offer numerous bird, beetle, butterfly and insect species (e.g. acorn borer, oak moth, stag beetle, red wood ant, tawny owl, jay) as well as wild animals (e.g. pine marten, squirrel), wild boar) or bats shelter and habitat. Over 100 species of caterpillars alone find their habitat in oaks.
In addition, the oak has a high symbolic power. In ancient Rome, the winners of the Capitoline Games were honored with a wreath made of oak leaves. In addition, the oak wreath (Corona Civica) was the highest military honor in the Roman Empire. The oak itself, but also all of its parts from the leaves to flowers, fruits (acorns), trunk and branches have found their way into heraldry (heraldic creatures). The oak has been the typical German heraldic tree since around the 17th century.
The oak leaves are still depicted on the back of the German 1, 2 and 5 cent pieces. During the DM times it adorned among other things. even the 5 DM note.