What is a chemical cell without transmission 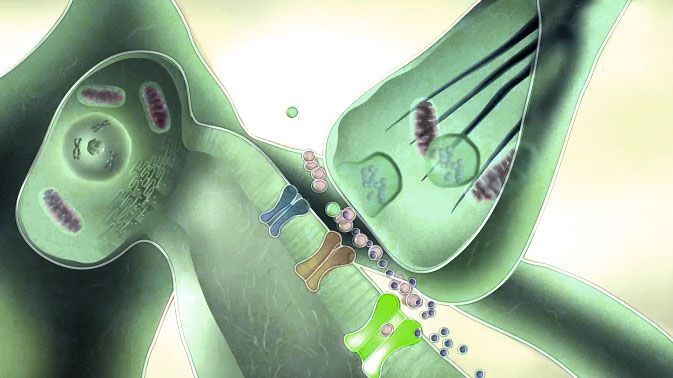 Around 86 billion neurons have to constantly communicate with one another so that humans can feel, act and think. Complex chemical and electrical processes take place in thousands of cells in milliseconds - for a single meaningful action.

As long as a neuron does not “fire”, it is in a state of rest. In this phase, a certain voltage, the resting potential, prevails on the outer skin of the cell, the membrane. If the neuron is stimulated accordingly, for example by another nerve cell or a sensory input, a changed electrical voltage is created on the axon's membrane, which is propagated to the synapses. One speaks of the action potential, which lasts about a millisecond in humans. In the synaptic ending, the action potential triggers the release of chemical messenger substances (neurotransmitters) that bridge the synaptic gap and trigger an action potential in the next (postsynaptic) nerve cell.

The change from resting to action potential occurs when certain ions flow in and out of the axon's cell membrane. At rest, there are more potassium ions inside the axon, while there are more sodium ions outside. Since potassium ions can migrate outwards through the membrane better than sodium ions in the opposite direction, there is a positively charged environment on the outside of the membrane and a negative one inside the cell. This creates a voltage across the membrane that is around -70 millivolts. If a suitable stimulus comes, ion channels open briefly in the membrane, through which positively charged sodium ions flow in very quickly. Now the potential inside becomes more positive, more channels open, one speaks of a depolarization. Only when this is strong enough, i.e. when it exceeds a certain threshold value, does the action potential appear as a kind of explosive polarization of the membrane (“all or nothing principle”).

While the action potential shoots along the axon like a wave, the repolarization already begins on the axon hill near the cell body: Potassium ions emerge through their own channels that are now opening, while the sodium channels close again. The imbalance of the charges will decrease until the state of rest is reached again. In the following, active sodium-potassium pumps ensure that the sodium ions that have flowed in are transported outwards again and the potassium ions inwards. Everything is now back to the beginning.

In addition to chemical synapses, electrical synapses have also been discovered. So-called 'gap junctions' play a role in this electrical communication between two cells - channels made up of proteins that connect the cell fluids of two neurons. Electrical signals can transmit ion currents through these channels directly from cell to cell without any detours. "With gap junctions you can synchronize many cells with one another over a greater distance," says Nils Brose, Director of the Department of Molecular Neurobiology at the Max Planck Institute for Experimental Medicine. "When a cell receives a signal, it is immediately transferred to the other cells, as they are connected to one another like a plug and socket."

Although this sounds very efficient, this purely electrical form of transmission occurs more in more simply developed animals such as crabs, where they control rapid escape reactions, for example. In humans, the need for more complex forms of transmission has become established in the course of evolution.

Imagine having to encourage conference participants to behave in a collaborative, meaningful manner. The catch: the conference has a billion participants and you only have a fraction of a second to spend. Impossible right? But it works in the body, incessantly and with an impressive success rate. In order for the smallest actions or emotions to be possible, the approximately 86 billion nerve cells in the brain have to work together and communicate with one another. Cells: specialized workers in the brain

The nerve cells understand each other perfectly - with the help of electrical and chemical signals.

Neurons are the sprinters among cells

Anyone who rolls up a portion of spaghetti hungry with a fork does so thanks to a kind of "silent post" of various neurons: The central nervous system activates the arm and hand muscles with the help of nerve cells that specialize in motor functions - so-called motor neurons you can grab the fork. At the same time, sensory neurons continuously deliver information to the brain, for example about the position of the hand and the pressure of the fingers on the fork. This information is processed in the brain by groups of nerve cells that are responsible for controlling the arm, hand and fingers, so that the further course of the movement can be precisely controlled - again via the motor neurons. This is how you actually manage to keep the long, slippery pasta on the fork.

That sounds simple. However, the flow of communication is extremely complex and involves millions of nerve cells that analyze, inhibit or amplify information via a combined electrical and chemical process and then relay the result.

To understand this, you have to briefly recall the structure of a nerve cell: Put simply, a neuron usually consists of the cell body and several branches that are in contact with other nerve cells and through which information is received or sent. The sending process is called the axon and can be up to a meter long. The receiving processes are called dendrites. A neuron can interact with 100,000 to 200,000 fibers from other nerve cells.

If the incoming signals from other nerve cells are strong enough, i.e. if a certain threshold value of the excitation is exceeded, the neuron fires: An electrical impulse, the so-called action potential, shoots along the axon in the direction of the synapse (see info box). Depending on the type of nerve cell, this can be done slowly or in quick jumps: In extreme cases, the conduction of excitation can reach a speed of 120 meters per second.

The speed of electrical transmission depends not only on the thickness of the axon (thick axons conduct faster, thin axons more slowly) but also on certain helper cells that coat the nerve fibers: in the brain and spinal cord these are the oligodentrocytes, in the peripheral nerve the Schwann cells. Both are two types of glial cells. Glial cells: an underrated glue

They often form dense, spiral-shaped sheaths around the axon, which are strung like pearls on a chain and interrupted by small gaps. The sheaths are called myelin sheaths, the gaps between them are called Ranvier's lacing rings. The myelin sheaths work like the insulation on a cable. No action potential can arise at these points - which means that the electrical impulse does not continue continuously, but simply skips over the insulating areas. That makes the forwarding much faster. 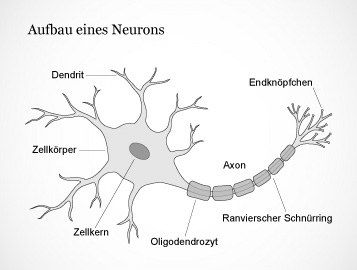 A neuron consists of a cell body and its appendages. Receiving processes are called dendrites, and sending axons. © Julia Dietel

The action potential finally reaches the end of the axon, the synaptic terminal button. This is the point of contact with another nerve cell. The synapses are the central switching points for the transmission of information in the brain. Each nerve cell has up to 10,000 of them, in extreme cases even more than 100,000. But because the synaptic endings of the sender cell do not touch the recipient cell directly, a tiny gap of 20 to 50 nanometers remains between the two. To overcome this barrier, most synapses use chemical messengers - although there are also some that work purely electrically (see info box).

In chemical synapses, after the arrival of an action potential, the so-called synaptic vesicles - around 40 nanometer small vesicles - fuse with the cell membrane and release messenger substances into the gap. These so-called neurotransmitters can cross the gap that separates the presynaptic from the postsynaptic cell. Neurotransmitters: messenger molecules in the brain

The postsynaptic neuron has competent reception points for the information: the receptor molecules. Each receptor specializes in a certain neurotransmitter like a key and a matching lock. The neurotransmitters generate what is known as the postsynaptic potential in the recipient cell, a change in the neuron's membrane potential: the chemical signal is translated back into an electrical signal. And here again applies: If the cell receives a sufficiently strong signal or if the sum of the different signals arriving at the same time is large enough, the postsynaptic cell generates a new action potential in the initial part of its axon, the axon mound - the impulse is passed on. 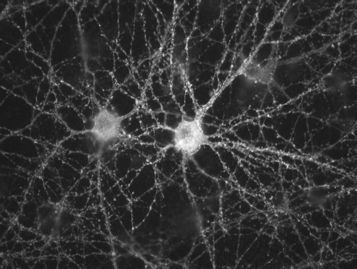 Nerve cells mostly use chemical synapses to communicate with other neurons. Hundreds to thousands of such synapses of other nerve cells can be docked to a neuron. Here you can see accumulations of synapses with glutamate receptors, recognizable as bright points. Sabrina Eichler / AG Jochen Meier / MDC Berlin

There is also controversy at the cellular level

But be careful: The effect of the neurotransmitters is not always excitatory, i.e. exciting. They can also act inhibitory, inhibiting and thus the emergence of a new action potential