What gas is used to ripen fruits 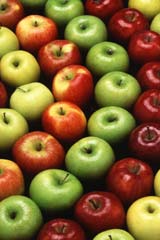 Everyone has heard the saying that a bad apple can ruin the whole basket and therefore knows that ripe fruit should never be stored in one room with unripe ones. But why is that so? Here, too, a hormone comes into play.

Ripening fruits such as apples, pears or cherries release ethylene. Ethylene differs from the other plant hormones in that it is gaseous. Therefore it is not only active as a messenger substance within an individual, but can also influence specimens that are in the same basket. Ethylene triggers a real chain reaction when it comes into contact with neighboring fruits. It also stimulates the production of ethylene there and ensures that it ripens prematurely. 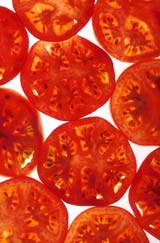 But what happens when the fruit ripens? We expect a ripe tomato to be red in color and soft. The typical color of the fruit arises from a change in the pigment composition. Ethylene first causes the breakdown of the green colorants, the chlorophylls, and the increase of other pigments. In the case of tomatoes, these are carotenoids. Enzymes, which are required for the ripening process, increase in their activity and convert storage substances into sugars. This gives the fruits their sweetness. The breakdown of pectins also causes the fruits to lose their structure and become soft. Researchers have measured particularly high ethylene values ​​in the separating tissues, which ultimately leads to the fruit falling off the mother plant.

The ancient Egyptians and Chinese already used the effect of ethylene on fruit ripening, of course without knowing the exact processes. Scientists only succeeded in clarifying this at the beginning of the 20th century, when they identified ethylene as the responsible plant hormone.

The self-ripening of fruit caused by ethylene can become a problem when transporting fruit from the country of origin to the consumer markets, as the fruit would often arrive mushy. Bananas, for example, are therefore transported in unripe form and stored in a cool place during the trip, as low temperatures inhibit the synthesis of ethylene. Gassing with carbon dioxide also delays the formation of ethylene. Some fruit traders store the fruit under negative pressure in order to remove freshly formed ethylene. When they arrive at their destination, the fruits are again gassed with ethylene in order to trigger rapid, simultaneous ripening.

Unfortunately, this treatment has a negative effect on the taste, because aromas cannot develop in the same way as sun-ripened tomatoes under natural conditions. Biotechnologists tried to solve this problem and in 1994 brought the first genetically modified tomato released for human consumption to the market. In her, the gene that is needed to break down the stabilizing pectin has been switched off. This allowed the tomato to ripen longer in direct sunlight without becoming mushy prematurely. However, since the sale of genetically engineered products continues to meet with reluctance among the population, this tomato, unlike in the USA, has never appeared on the shelves of the food markets in the EU countries.

Subterranean plant parts are usually very breathable. However, when waterlogging forms in damp soils, there is often a lack of oxygen in the root area. The plant reacts to this by forming cavities in the tissue that facilitate gas exchange. Certain root cells are sacrificed and broken down into their components. This programmed cell death is also triggered by ethylene.