How many Roman emperors were there 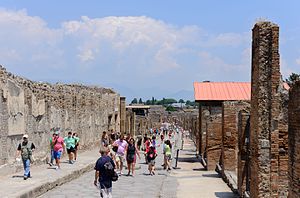 Pompeii was a Roman city. They were destroyed by a volcano about 2000 years ago. They began to be excavated about 250 years ago. The discovery of Pompeii was an important step in archeology, the science of ancient things. Pompeii also attracts many tourists. 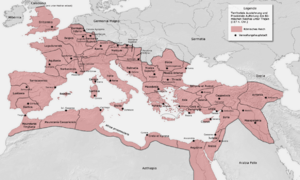 The Roman Empire was an ancient state. From around 200 BC to 480 AD it was the largest empire in Europe at that time. The capital Rome was initially just an unimportant city in today's Italy. But after the Romans conquered Italy, ultimately no country around the Mediterranean could defend itself against Rome.

The areas that are now Austria and Switzerland also belonged to the Roman Empire. In addition, the Romans came to the Rhine and the Danube in what is now Germany. To defend their border in the north, the Romans built the Limes. That was a fortification with a wall and a moat.

Many other peoples also wanted to live like the Romans and learn from their technology. Sometimes they not only adopted a way of life or an invention, but also the word for it. The language of the Romans was Latin, so many words in German come from this language. As examples: "Window" comes from the Latin "fenestra", "Kiste" comes from "cista" and "anchor" comes from "ancrum".

There are not many empires in history that grew and existed as long as the Roman one. It was divided in AD 395. After that, the western part continued to exist for almost 100 years. Eastern currents even existed for over 1,000 years. This part was later called the Byzantine Empire, Byzantium after its capital. Today the city is called Istanbul and is located in Turkey.

How did the Roman Empire come about? 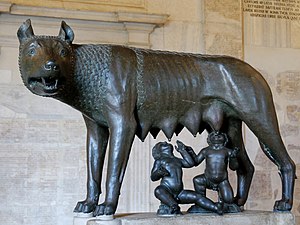 The legendary founders of Rome: Romulus and Remus with the "wolf mother"

The Latins were a people who originally came from central Europe. About 3000 years ago they settled in the area that later became Rome. This area was then called "Latium". Today it is called “Lazio” in Italian.

According to a Roman legend, there was a dispute over who should become the new king of Lazio. Rhea Silvia, daughter of the rightful king, had twins from the god of war, Mars. Their names were Romulus and Remus. They were supposed to be killed, but the soldiers who were supposed to do so abandoned the twins instead. Romulus and Remus survived because a she-wolf fed them.

They became the founders of Rome. That was supposedly on April 21st, 753 BC. Hence the name of the Roman calendar: "ab urbe condita", since the city was founded. As far as we know today, the Romans didn't always count the years that way.

It was a long time before the state of Rome became great and powerful. About 200 years before Christ there was the second war against the Carthaginians, an important power in the western Mediterranean. Until this war, the Romans ruled Italy. After that they ruled over large parts of Spain, and in the years that followed over almost all countries around the Mediterranean. The Romans called this sea “mare nostrum”, our sea.

Who was in charge? In the Senate of Rome. At least that is how an Italian painter imagined it, over a hundred years ago.

According to legend, Rome first had kings. Apparently it was five before the last of them was driven out by the people. That time ended in 510 BC. However, very little is known about the royal era.

This was followed by a long period which is now called the period of the Roman Republic. At that time the most important organ among the Romans was the Senate. In name it was the Council of Elders. The important, wealthy families were represented in the Senate. There were also elections by the people.

In the republic it happened that someone was only allowed to be the head of government, the consul, for one year. In addition, the boss always had a colleague, so two men were boss at the same time. The aim was to prevent someone from gaining too much power.

But that is exactly what happened in the decades before the beginning of our era. In 44 BC, Julius Caesar became the first permanent dictator. The first emperor of Rome was Augustus, his nephew and successor. There was still a senate, but the most important things were decided by the emperor.

Sometimes the emperor's son became the new emperor. Or the emperor adopted someone whom he wanted to make his successor. Diocletian, who was emperor around the year 300, came up with the following: There should always be four emperors at the same time, each taking care of a part of the empire. A few decades later, with Constantine the Great and Theodosius, there were again two powerful autocratic rulers.

How did people live back then?

Like most other peoples, the Romans lived primarily from agriculture: They kept cattle and tilled fields. As the empire and cities grew, so did crafts. One traded in goods and also in slaves.

Slaves were often people captured in a war. As a result, when there were many such wars, wealthy Romans had many slaves. Some researchers like Karl Marx therefore later thought that the Roman Empire was a “society of slave owners”. In reality this is only true for a certain period of time. It is true, however, that ancient writers seem to have considered slavery to be quite normal.

Most of the people in the city lived in large apartment buildings that stood side by side like islands in the city, separated from the streets. That is why they are called "insula". Shops were often found on the ground floor. Some of these houses had five floors.

The rich, on the other hand, liked to live in the country in a villa, far from the noise and stench of the cities. In the middle of a villa was an inner courtyard, the “atrium”. Often there was a small pond there. A large farm usually belonged to the villa.

Women had little to say about the Romans. The head of a family was the father. Such a family could be quite large. With rich people, it wasn't just parents and children, but other relatives as well. There were also servants, workers and slaves.

What is the Roman Empire known for? 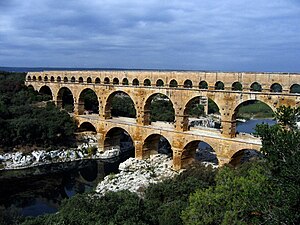 The Pont du Gard is an aqueduct from Roman times. He is in the south of France. It has survived the ages because it not only carried water, but also served as a bridge.

It is said that the Romans did not invent many things. They took over a lot, for example, from the Greeks who had conquered them. There were also many slaves who had to do the work. That is why there was no need for inventions that would have made life easier. A well-known exception is the underfloor heating.

In Roman times, however, great buildings were erected and important roads laid out. Some of these “Roman roads” still exist today, even if they are developed differently today. The streets weren't just important for trade: soldiers could quickly go where there was a riot. Important news could also be spread relatively quickly by messengers for the time. They also built special bridges and called them "aqueducts". They used it to convey drinking water from the mountains to their cities.

Today one thinks last but not least of the Roman gladiators. The expression means swordsman, but the gladiators also fought each other with other weapons. The “Gladiator Games” were a great pleasure for the audience. The life of the gladiators, mostly slaves, was hard and short. But the loser of a fight was by no means always killed - that would have been too expensive for the owners.

How was the Roman era in German-speaking countries? 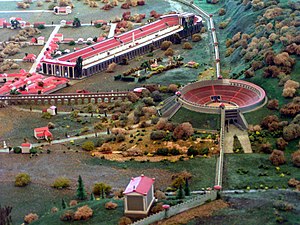 This photo shows a model showing a Roman city from the past. This is what the circus and the amphitheater in old Trier could have looked like.

The Roman era can be seen in many parts of Europe as a transition from prehistory to history. This is also the case in the countries where the Germanic language is spoken today. However, many of our words go back to the Latin of the Romans.

It was very bad for the people in such an area when the Romans came. Heavy fighting often ensued. Later, however, it was often more peaceful where the Romans ruled than where individual tribes still fought against each other. For a long time the Limes was the border between the Romans and the Teutons who lived outside the Roman Empire. Attacks by the Teutons were repeatedly repulsed there, but there was also a lot of trade.

The Roman era ended after a few centuries, but not suddenly. The Romans withdrew from some areas earlier than from others. That was around the time of the Great Migration, between 370 and 570 AD. The Roman Empire was divided into several smaller empires. Since then, Germanic rulers have had the say in Germany. But at that time the Roman culture was already so widespread that much of the Roman lived on in this way.

Why is there no longer a Roman Empire?

Tetricus was the ruler of a "Gallic Empire". This empire existed for a short time in what is now France and England. That was about 200 years before Romulus Augustulus, the last emperor in the west.

To this day, scientists wonder why the Roman Empire actually went under. There are many reasons for this. The so-called downfall lasted several hundred years, which makes the search for the reasons confusing.

The migration of peoples was seen as one of the reasons for the downfall. Teutons and Celts, but also other peoples and tribes, immigrated into the empire or attacked Roman cities. But there weren't that many people. In addition, one must first explain why the empire was so weak that the cities could be captured.

As early as 200 or 300 years after Christ, the economy no longer seemed to be doing so well. The people got poorer. However, it was different from area to area. The economic problems alone cannot explain the downfall.

In 395 AD the kingdom was divided into a west and an east. Such divisions existed before, however. Emperor Diocletian even arranged for several emperors to rule in parts of the empire and maintain order. The division of 395, after the death of Emperor Theodosius, became permanent.

The empire in the east, the Byzantine Empire, existed long into the Middle Ages. The empire in the west supposedly went under in AD 476. At that time the emperor in the west was a child named Romulus. A Teuton, Odoacer, deposed him and made himself ruler. However, Odoacer was also a Roman soldier, and soldiers had already taken the place of the emperor before that.

So it's difficult to say when the Roman Empire really ended. Maybe it was more of a long transition. The world of the Middle Ages in Europe slowly emerged from the world of the Romans. Much changed in the process. But some things remained: for many centuries people wrote primarily in Latin. A Germanic empire, the Frankish Empire, was even called the Holy Roman Empire. It existed until 1806.

There is also an article on “Roman Empire” for beginners on MiniKlexikon.de and other search results from Blinde Kuh and Ask Finn.

The Klexikon is like a Wikipedia for children and schoolchildren. The most important things explained simply, with definition, many pictures and maps in over 3000 articles. Basic knowledge suitable for children, everything easy to understand and good for presentations in school.
<?