Looking back on a year of protest in Hong Kong

On the afternoon of March 15, 2019, the DW journalist had a conversation with two bartenders on the 30th floor in a hotel bar in Hong Kong's Kowloon district. One is from France, the other from the Philippines, both of whom have been working in Hong Kong for a number of years. "Everything has become Chinese," says the young Frenchman with a view of the Hong Kong Island skyline on the other side of Victoria Harbor. He heard that the neon billboards were used by Japanese and American companies in the past. Now the names of large corporations from China were predominantly emblazoned there: China Life, Maotai, Evergrande. Most of the guests in the bar are also mainland Chinese, the Filipino adds, recognizing them by their pronunciation. 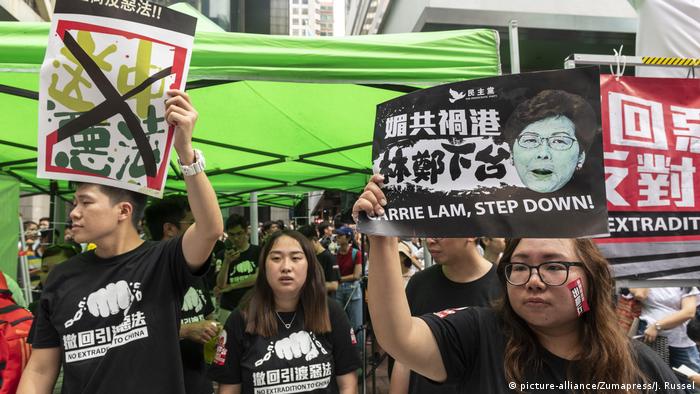 Resistance to the extradition law

Far down on street level, meanwhile, a small group of democracy activists has occupied the lobby of the Hong Kong city administration in the Central district. “Carrie Lam has betrayed Hong Kong!” “Stop the extradition law,” they chant.

For now, there is a controversial change to the Hong Kong extradition law. But as with the umbrella protests and the "Occupy Central" movement in 2014, it is essentially about how strongly the Beijing leadership can and should intervene in Hong Kong affairs. And the question: Who should shape Hong Kong's future, the voters in Hong Kong or the authoritarian regime in Beijing? In 2047, the 50-year transitional principle of "one country, two systems" will expire. "What then?" Is what the younger residents in particular ask themselves.

In February 2019, the Hong Kong head of government ("Chief Executive") Carrie Lam introduced the draft for an amended extradition law to parliament. For the first time, it would have made it possible for suspects in Hong Kong to be transferred to law enforcement agencies on the mainland. Absolutely unacceptable for many Hong Kong residents, because the memory of "disappeared" booksellers and business people, some of the "confessions" made later on Chinese state television were still fresh.

Protest in parliament and on the street

On April 3rd the first reading took place in the city parliament (Legco). There the parliamentarians critical of Beijing vented their displeasure with the "sell-off" to Beijing. The government representative had to interrupt the presentation of the proposed law eleven times after massive interjections and objections.

Citizens also protest against the proposed law on the street. According to the activists, more than a million people demonstrated on the street on June 9, a Sunday. The reason: on June 12th, the second reading should take place in Legco. The mile-long train marches peacefully through the government district for seven hours.

But the demonstration ends with violence between rioters and police officers. The scenes are repeated on June 12th, when demonstrators block the entrance to the parliament building in order to prevent the second reading of the extradition law. Late in the evening, around 2000 mostly young demonstrators gather for a night vigil in front of parliament. The second reading is postponed. 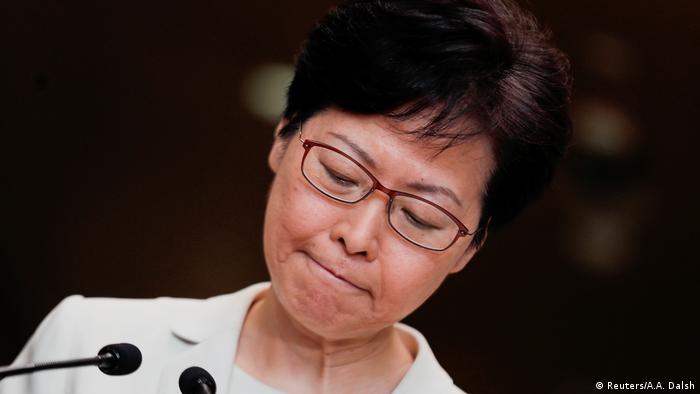 Carrie Lam, Hong Kong's head of administration, was elected by a China-friendly commission

Carrie Lam gives in - something

Public pressure on Carrie Lam is mounting and she will have to back down on June 15th. "The government has decided to suspend the bill," she said. But that does not mean that it is finally off the table. Again there is a mass demonstration, two million according to the organizers, 330,000 according to the police. On July 1, the anniversary of the return of Hong Kong to China, more than half a million people took to the streets. Thousands of protesters gather to demonstrate against the annual flag ceremony. Others are trying to storm parliament. They break in windows of the government building and try to gain entry by force. 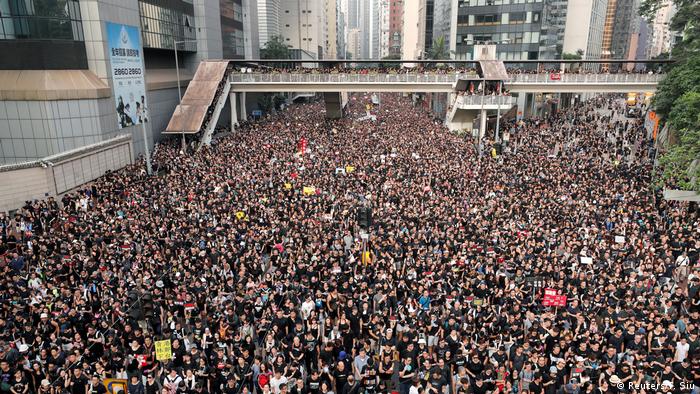 In the second half of the year the demonstrations will be more decentralized, more frequent and more "creative". Flight operations at the international airport, the most important hub in Asia, have to be suspended several times.

The police are now cracking down on the demonstrators, tear gas and rubber bullets are used, including water cannons. In order to identify the rioters, the Hong Kong government has issued a ban on masking. At times there is speculation as to whether the central government will use the soldiers of the Chinese People's Liberation Army stationed in Hong Kong to restore order. However, this does not happen.

The protest movement calls for the investigation of police operations, which they believe to have been disproportionate violence. Another demand: Carrie Lam, who is described as incapable of government, should resign. And as in 2015, general and free elections are required. 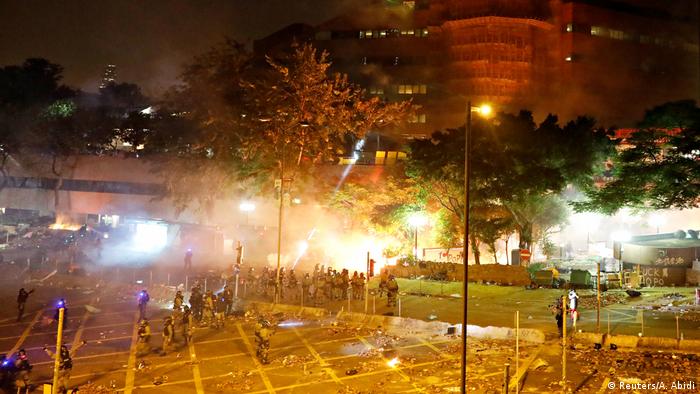 There does not seem to be a central leadership of the protest movements. The activists vote on their actions via social networks. A 12-day occupation of the grounds of the Hong Kong Polytechnic University begins on November 17th. The police suspect many violent rioters have holed up on the campus and are besieging the campus in order to wear down the morale of the occupiers.

Rioters throw gasoline bombs at the police and set parts of buildings on fire. The police drive up in armored vehicles and shoot with tear gas. After the occupiers gave up, the police seized more than 3,800 gasoline bombs and 500 bottles of toxic chemicals. 1,377 people are arrested, very few of them students from the Polytechnic University. The personal details of 318 minors were recorded, who are then allowed to go home.

The civil war-like escalation of the conflict between democracy activists and security forces did not lead, as might have been expected, to a strengthening of the pro-Chinese camp as a guarantor of law and order. Rather, the opposition candidates achieved a clear victory in the local elections on November 24th, where they won a majority in 17 of 18 district councils. 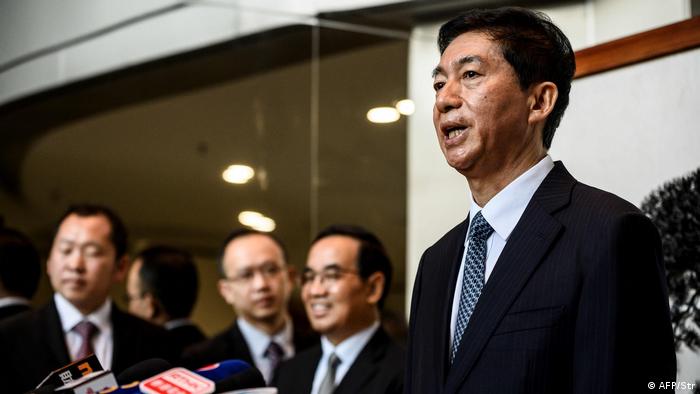 The punishment of the candidates loyal to the government may have played a role in the replacement of the head of the Beijing liaison office in Hong Kong. Xi Jinping held on to the ailing Prime Minister Carrie Lam. To the surprise of insiders, he put 65-year-old Luo Huining in the de facto most important post in Hong Kong. Luo, who comes to Hong Kong from the "outside", did a great job "cleaning up" in the corruption-ridden Shanxi Province in 2016. Xi undoubtedly expects him to make progress in "taming" the unpredictable conditions in Hong Kong.

The outbreak of the novel coronavirus on the mainland and the concern and uncertainty it caused may have temporarily weakened the protest movement in Hong Kong. However, the government cannot feel safe: Radical opposition forces knew how to use the Corona crisis in their favor and, together with a newly founded union, organized a - possibly illegal - multi-day strike of around 3,000 workers in the health sector at the beginning of February. Their demand: Complete closure of the borders with the mainland, which the Hong Kong government refused. Defense against the virus and defense against China entered into a short-term symbiosis, which suggests further confrontations in the future.