How cold is Neptune 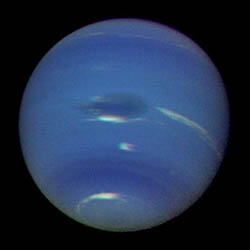 Neptune is a little smaller than Uranus, but still a giant compared to Earth. It orbits the sun at a distance of four and a half billion kilometers! For one orbit, i.e. one year of Neptune, he needs an unbelievable 165 earth years! That is much longer than a human life.

So it moves very slowly across our sky and often stays in the same constellation for years. Only in 2011 will it be found again at the point in heaven where it was discovered in 1846.

Like the other gas planets, Neptune consists mainly of hydrogen and helium and some methane. Methane gives it its pretty blue color. Inside it has a solid iron core the size of the earth.

Due to the great distance from the sun, it does not get much of its warming rays. Neptune is one of the coldest places in the solar system. Its outside temperatures are around -200 ° Celsius!

There is one thing that Neptune is very quick about: turning around itself! A Neptune day lasts just 16 hours. The rapid rotation deforms the gas ball. Its center becomes thicker, the north and south poles are flattened. 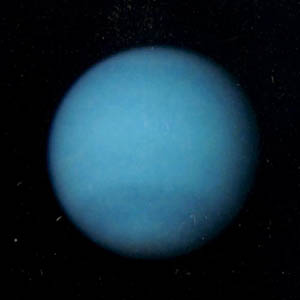 Neptune is named after the ancient Greek god of the sea, Poseidon, who was later called Neptune by the Romans. Its beautiful blue color is actually reminiscent of sea water. The name 'Oceanus' was also an option after its discovery, but 'Neptune' was chosen.

Neptune, like Uranus, was unknown for a long time; its discovery was not that long ago. It cannot be found in the sky with the naked eye, because it is much too small and weakly luminous. Only with a telescope does Neptune become visible to us.

In the 19th century there was a competition for its discovery. It was clear that there had to be another planet behind Uranus. But who would find it first? You can find more about this story at the end of this page.

To Neptune and beyond 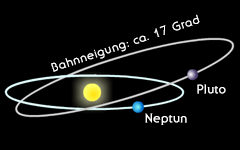 Today Neptune is the outermost planet of the solar system. For 75 years, Pluto was considered the last planet. At times, Pluto is closer to the sun than Neptune.

But since Pluto is very small and further celestial bodies have been found behind him that are as big as him or even bigger, Pluto was downgraded to a dwarf planet.

You can find out more about this on the 'How many planets' page. 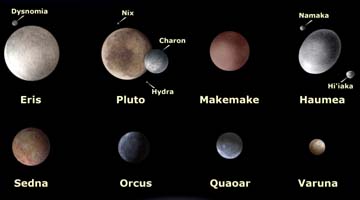 There are probably many dwarf planets buzzing around behind Neptune. It is difficult for us to find them because they are small and very far away from us.

Nevertheless, we are already familiar with some of them, e.g. Quaoar, Sedna and Eris. The New Horizons spacecraft is currently heading towards Pluto. She will possibly find more dwarf planets behind Neptune.

Objects behind Neptune are also called Trans-Neptune Objects (TNOs). They form the Kuiper Belt, in which hundreds of thousands of small bodies cavort and orbit the sun in very large orbits.

The violent storms in the entire solar system are raging on Neptune! They are often ten times the speed of tornadoes and cyclones on Earth. Top speeds of up to 2100 km / h have already been measured. No house here on earth would be safe from that!

The exploration of Neptune

They say Neptune is a giant ball of gas. But the planet doesn't just consist of gas. As with the other gas planets, the pressure and temperature increase the deeper you go into the gas ball. With increasing temperatures and pressures, the elements change and gases liquefy. 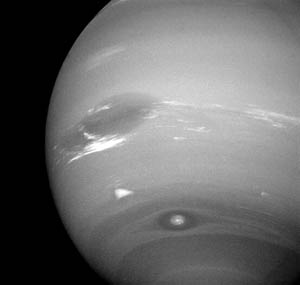 The conditions inside the gas planets are so extremethat a solid core develops. The transitions are fluid, so you cannot say exactly where the atmosphere ends and the solid planetary surface begins. In any case, the atmosphere is much thicker and denser than that of the earth.

Despite the great distance to the sun, there are also weather phenomena on Neptuneas we know them from Earth. Clouds or storms form and race around the planet at breathtaking speed. Storms at over 1600 km / h have already been observed.

However, the processes are not yet properly understood. So far from the sun and its energy, the Neptune atmosphere is amazingly active and dynamic, as long-term observations of the Neptune clouds and storm areas have shown.

There are even northern lights on Neptune! On earth they are caused by the sun, whereby particles from the solar wind penetrate the earth's atmosphere and make it glow. It is amazing that something like this can also be found at a distance of 4 billion from the sun! 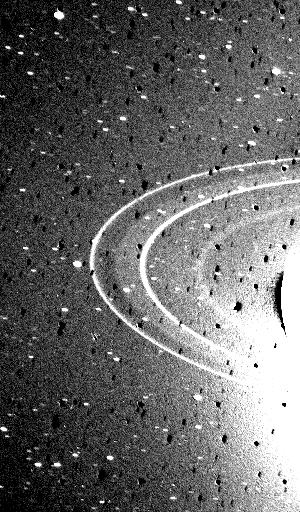 Neptune has so far been examined by a single space probe. It wasn't until 1989 that Voyager 2 came to visit, after stopping by Jupiter, Saturn, and Uranus. We owe a lot of new knowledge to the Voyager mission and, above all, good and sharp photos of the outer planets that we couldn't take from Earth.

Voyager 2 passed Neptune at a distance of just under 5000 kilometers. She discovered a very fine one Ring system around the planet and six new moons of Neptune. In addition, its clouds were observed, the magnetosphere examined and some moons photographed.

Geysers and polar caps have been discovered on the largest Neptune moon Triton and a thin atmosphere has been detected, which is very unusual in this enormous distance from the sun.

The miraculous discovery of the 8th planet

Neptune is the first planet that was predicted by mathematical calculations and then discovered at this calculated point in the sky. Comparisons of observation data and precise orbit calculations for Uranus showed that it behaved differently than would have been expected. Uranus moved sometimes faster and sometimes slower. Something had to pull on him or slow him down! Uranus just didn't stick to the calculations.

Another planet behind Uranus was suspected, which influences it with its gravity. Two mathematicians tackled the problem independently: the Englishman John Adams and the Frenchman Urbain Le Verrier. Both calculated the position of the new planet using very laborious and complicated mathematical equations. That was a masterpiece in a time without computer support!

Neither of them had the opportunity to check their results and search for the planet themselves in the sky. So they asked for help from astronomers who were then working in large observatories. Johann Gottfried Galle, Observator at the Berlin observatory, was commissioned by Le Verrier to search the sky and finally found a spot of light at the previously calculated location.

A comparison with star maps showed that there is usually no star there. Further observations a short time later showed that the spot of light had changed its position - a clear indication of a body within the solar system!

So in 1846 it was clear: The eighth planet has been found!

Neptune was observed and recorded much earlier! That could be reconstructed in retrospect. It just wasn't clear that it was a planet. Galileo, for example, saw him as early as 1612 when he was watching Jupiter and made notes about it. But he thought it was a background star or a moon of Jupiter.

You can find out more about the discoveries of the planets Uranus, Neptune and Pluto and the people associated with them in the book 'The Neptune Files' by Tom Standage.

The images on this page are from NASA (Courtesy NASA / JPL-Caltech).