The "Entenhausen Law Book": Claim and legal reality in Duckburg

3/6: By no means no employee rights

The ETUC also states that, in principle, no employment contracts are concluded in Duckburg; "Since there are also no unions, many employees have to take on any task, no matter how ungrateful."

In fact, however, Tick, Trick and Track successfully base a wage claim against their great-uncle in Barks' Horseradish Story, which appeared in 1953, on a written employment contract. In An Eye for Detail, too, the great-nephews clearly negotiate such a contract for their uncle, in which, for example, the number and length of coffee breaks are stipulated. 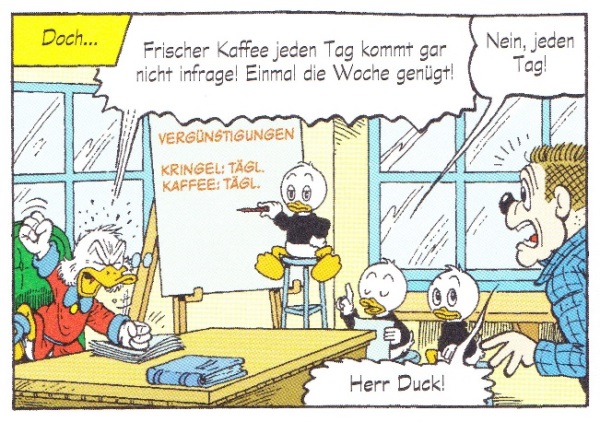 In the way the law wants it, Donald can finally also refer to an employment contract - which, however, is of no use to him in the absence of a prohibition of offsetting against non-attachable claims, such as § 394 sentence 1 of the German Civil Code: Dagobert simply offsets the wages owed with Donald's well-known astronomically high mountain of debt. And already in Only a Poor Old Man Dagobert complains about the level of collectively agreed wages, which at least suggests a certain degree of employee rights and union organization.