A couple of clever tips 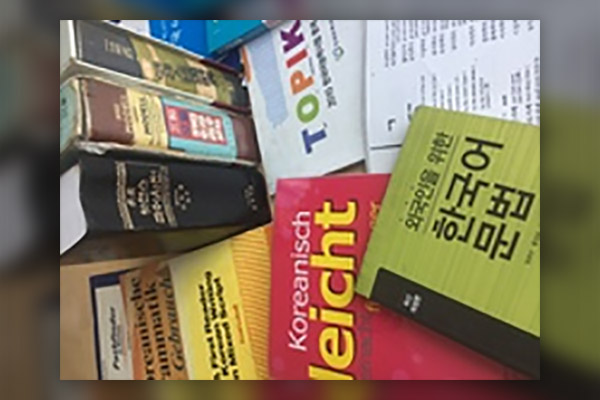 Last time, I talked about the particular difficulties you face when you get involved in learning the Korean language. Today I want to mention a few things that helped me to gain some foothold as a beginner in Korean. Some of this certainly also applies to learning other foreign languages.

1. Safe command of writing and pronunciation as a starting point

What do you start with when you want to learn Korean? There aren't many alternatives: with writing and with pronunciation. One of the main reasons I started this venture in the first place is the Korean script. You don't just learn the complicated Chinese or Japanese characters on the side, but the Korean script, the Hangeul, a very logically structured script made up of phonetic characters, i.e. letters that are put together to form syllables, can be learned effortlessly within a week. You can start by writing your own name and that of your Korean friends in Hangeul, and it's easy to read simple English-derived words in Korean too. If one has understood the phonological principle of signs, one can, at best, read entire texts aloud without understanding a single word. That doesn't necessarily make sense, of course, but it can of course still be fun, you can impress your friends a lot and you feel pretty Korean.

While Korean script can be learned very quickly, it takes more time to pronounce it properly. And you should definitely take it. Because there are a few sounds that are not that easy for us Germans, and with which we absolutely need the help of Korean native speakers. These include the tongue tip R, the vowel “eu” or the tense consonants. Correct pronunciation is so fundamental that it should not be neglected at all at the beginning. What was once practiced incorrectly can, as I have also experienced myself, hardly be corrected later.

Once you have mastered the writing and sound, you can begin to learn words and expressions. How do I learn words? If I want to have the words quickly to hand later while speaking, it is advisable to never learn them in isolation, but always in connection with associations. The more concrete the association, the easier it is for me to keep the words and the faster I can activate them in the appropriate context and in the respective speaking situation.

Associations can be extra-lingual or intra-lingual associations. Extra-linguistic associations: When I learn the word “춥다 cold”, I think of cold winter air, when I learn the word “달 moon” I imagine the bright, silvery moonlight as clearly as possible when I use the word “뛰다 I learn to jump, I hop inside once in the air. With every word I try to have corresponding images, memories and experiences in mind. Positive pictures, things that I like, because when the word is connected with beautiful pictures and pleasant feelings, I feel good and am always happy when I hear the corresponding word or when I am allowed to use it.

Internal linguistic connections arise between words in the same category of meaning (“river”, “lake”, “sea” 강, 호수, 바다), between similar words (e.g. “large” and “huge” 크다 커다랗다) or between opposing words ("Easy" and "difficult" 쉽다, 어렵다). When I have learned a word, I immediately try to give it a “living space”, that is, I add it to a linguistic environment and a sentence where it fits well and where it feels comfortable. In this way, I am gradually opening up a huge field of vocabulary, all of which are linked to one another and to positive ideas and personal experiences.

3. Practice grammar and sentence structure in a playful way: memorize and vary

Words alone are not a language, however. If you want to speak, you have to connect the words you are using meaningfully. The rules for connecting words to sentences are called grammar. You have to learn the grammatical rules, there is unfortunately no getting around them. The hardest thing about Korean grammar is that it is so different from German grammar. Unlike in German, the nouns are not declined and the verbs are not conjugated, so the words are not changed, but they are expanded, particles are added to the verbs and nouns, particles for the different cases, or for local, temporal, instrumental, etc. . Regulations.

The grammar in Korean essentially consists of learning the particles, the attached building blocks of meaning. You have a lot to do with that, because there are tons of them. And it's always about firstly understanding the rule, secondly applying it and thirdly automating it. You need a textbook and a teacher to understand it, but you have to do it yourself. In my experience, this works best through playful practice in two steps. Firstly by memorizing and secondly by varying what has been memorized.

I consider one of the most effective learning methods ever - old-fashioned as I am - to simply memorize sentences or texts. As exhausting as it is, the long-term impact is enormous. In my experience, when you learn Korean sentences by heart as a beginner, it is very helpful to start at the back. Because the core element of the sentence, the verb, is in the back in Korean. If you gradually add all the preceding elements, you will always learn complete, grammatically perfect sentences.

In any case, the following applies: Speaking out loud is far more effective than just reading. The tongue and the ear have to follow the linguistic procedure. By speaking out loud, the text is internalized and externalized at the same time - a very effective use of language.

Most of all, of course, you learn in direct conversation with your Korean friends. Script, pronunciation, words and grammar are also interesting in and of themselves, but they are just the tools for communicating. The conversation is a much more complex situation than the exercise with the text book, a situation that requires much more concentration, mental alertness and courage.

That should be enough with the smart tips. How I actually felt when I exchanged my first few bits of Korean with the people in Korea, I'll tell you about it next time.